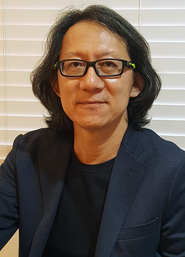 Boo’s paintings deal with a broad range of subject matters and styles, from mundane domestic objects to images of car and airplane crash-scenes, derelict interiors of cathedrals and unpeopled chambers of shopping malls. Boo treats banal objects, modern architectural interiors and destructive scenes as metaphors for the human condition. His series of semi-abstract paintings conjure a natural world gradually dissected and displaced by urban development. The network of horizontal, vertical and perspectival planes extends continuously within the picture plane mirrors the constant dismantling of the sites of memory. These imageries do not evoke real moments of memories but refer to an in-between zone of the real and the utopia; a baffling place where reality and fantasy coexist.

In his recent series of figurative paintings, Boo reframes his subjects through dark humour and an exaggerated theatricality to probe our perception of truth and reality.

Boo Sze Yang graduated from the Nanyang Academy of Fine Arts (NAFA) in 1991; completed his Postgraduate Diploma in Fine Arts at the University of Reading, UK in 1995 and received his Master’s in Arts Degree from Chelsea College of Art & Design, the University of the Arts London in 2004.

He is a recipient for the Asian Artist Fellowship Award 2010/2011 sponsored by Freeman Foundation for residency at the Vermont Studio Center in USA, and the Distinguished Alumni Medal 2017 from Nanyang Academy of Fine Arts, Singapore. In 2003, he was awarded the Juror’s Choice for the Philip Morris Singapore-ASEAN Art Award and in 2009, the Platinum Award, UOB Painting of the Year Competition. He is featured in the publication 100 Painters of Tomorrow published by Thames & Hudson in 2014.  His works are in the collections of the National Gallery Singapore, the Singapore Istana Art Collection, the Ministry of Foreign Affairs Singapore, Ministry of Sustainability and the Environment Singapore, Urban Redevelopment Authority Singapore, United Overseas Bank Singapore, Nanyang Academy of Fine Arts Singapore, Simmons & Simmons Contemporary Art Collection Singapore, The Ngee Ann Kongsi Singapore and Yingu Art Mansion in Beijing.