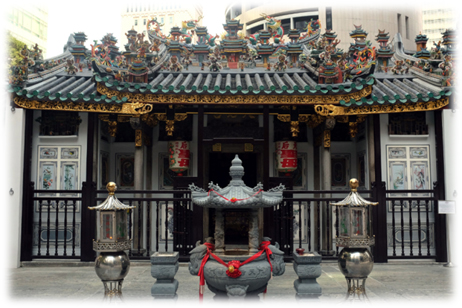 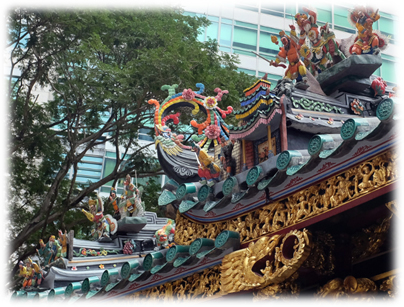 Covering a total floor area of about 1440 square metres, Yueh Hai Ching Temple was built by the early Chinese immigrants as a gratitude to the Goddess of the Sea, Mazu, for blessing their safe passage to Singapore.  With this migration, they brought along their skills and craft works of their hometown and incorporated it into the temple. The knowledge are transformed into colourful murals, sculptures and elaborate timber craft works which reflects truly about  the Teochew culture and Chinese virtues. These architecture ornaments are not just decorative, they are also meaningful, often symbols of luck, wealth, fortune, longevity, honour etc.  Even in modern times, these ornaments remains relevant as symbols of blessing sought by many. Although the Yueh Hai Ching Temple was built by the Teochew community,  it  is open to everyone and anyone who wishes to pay their respects to the deities, or simply to admire this newly-restored century-old Singapore heritage landmark.

Architectural elements to look out for at Yueh Hai Ching Temple as follows:

One of the most notable features of the Yueh Hai Ching Temple is the heavily ornamented roof, decorated with highly detailed sculptural reliefs.  These figures depict popular Chinese legends, styled like scenes from  Teochew opera.

These figures were created using a traditional technique known as cut-and paste porcelain shard work (Qianci嵌瓷), a distinct Teochew art form. Porcelain pieces in a collage of colours were cut to size and pasted onto the plastered figurines, providing a glazed sheen which gives a smooth and vibrant aesthetic. 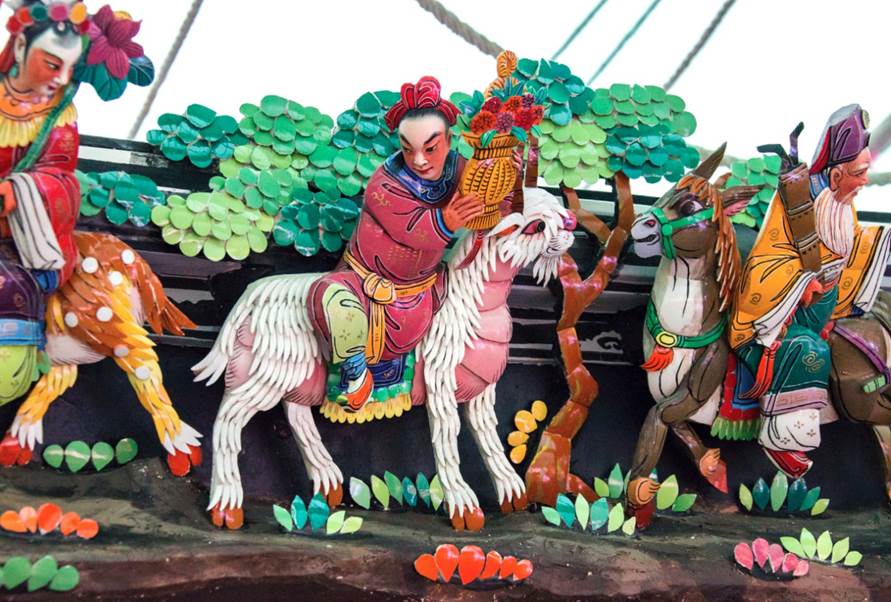 The qianci method is a unique method which has its own tools and system. It also embodies the characteristic Teochew spirit of preciseness and frugalness. Porcelain was expensive.  Traditional qianci method used the broken pieces of bowls and vases to decorate roofs, walls and other architectural structures, giving these thrown-out wares a new purpose.  Another reason for using porcelain is due to the geographical location of Chaozhou.  Like Singapore, Chaozhou is located near the sea and has a tropical monsoon climate.  The glazed surface of the porcelain is able to protect the colour from being washed out by the rain, thus maintaining the decorative appearance of the architecture.

With today’s technology, we are able to maintain the lustre and vibrant colours of the roof ornaments longer than before.  The figurines are coated with a special glaze to protect them from the harsh Singapore weather and sun exposure, like applying a layer of sunscreen, in hopes of preserving this beautiful monument for future generations.

To achieve the authentic and original “Teochew”  look, local craftsmen from Shantou were hired especially to recreate the figures. There are many carvings and sculptures of these animals adorning the walls of the Yueh Hai Ching Temple, and the most eye-catching ones have to be the tiger and dragon frescoes.  They are sculpted meticulously by master craftsmen, based on archival photographs, successfully bringing back to life many unique features typical of classical Teochew architecture.

The tiger and dragon frescoes were sculpted from the traditional bao hui (包灰) mixture of natural hydraulic lime, while shell ash was used as a bonding substance to hold the pieces together.  This mixture is used throughout the temple to sculpt the figures, which were then painted with special pigments that adhere to the plaster.  The natural hydraulic lime plaster is used in many historic buildings as they are more flexible, resulting in lesser cracks over time than modern plasters.  Due to the monsoon climate of Chaozhou and Singapore, this form of plaster is most suitable for its ability to set in wet conditions. 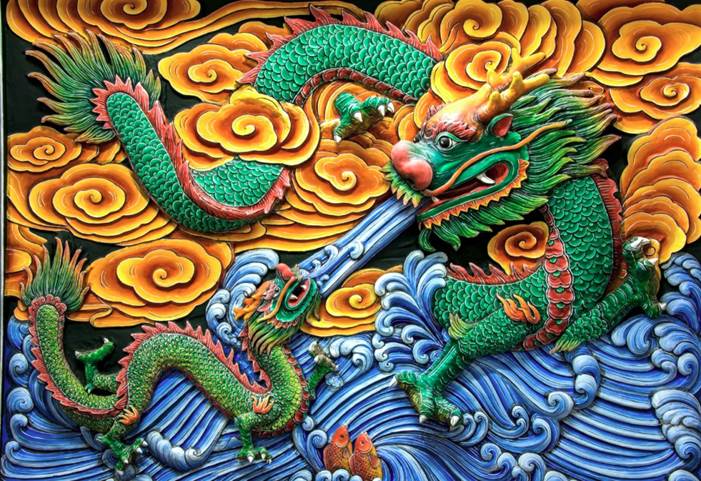 Throughout Chinese history, the dragon is a symbol of protection and prosperity.  The majestic appearance of it also reflects heavenly strength. During the Ming Dynasty, the emperor Zhu Yuan Zhang referred to the “real dragon” as having five claws which represented the Five Elements of metal, wood, water, fire and earth.  Only the emperor has the right to bear the dragon insignia on his robes and effects.  Commoners were allowed only to use designs of the dragon with three or four claws, to distinguish the difference from the “real dragon”. However, this practice was not heeded by the Chinese outside China, like Singapore and Malaysia, where temples sometimes bear dragons with five-claws. 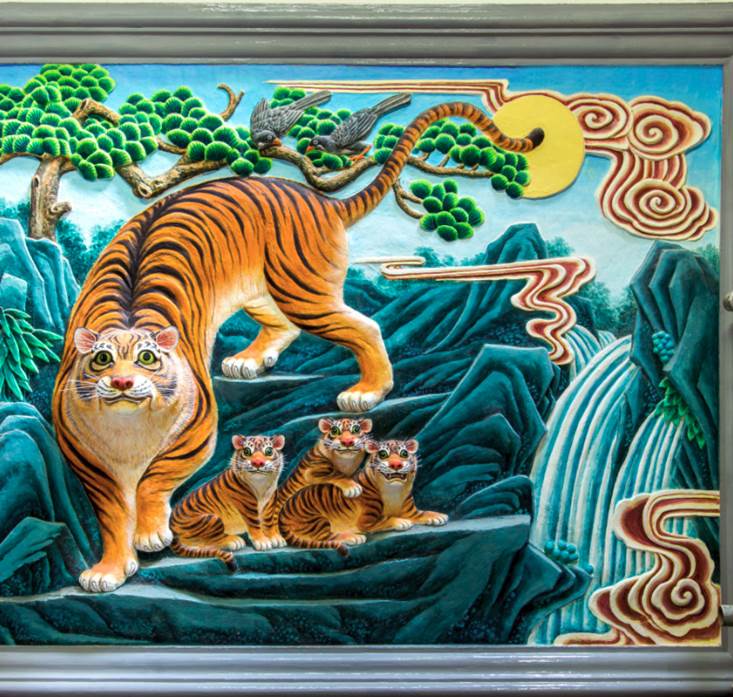 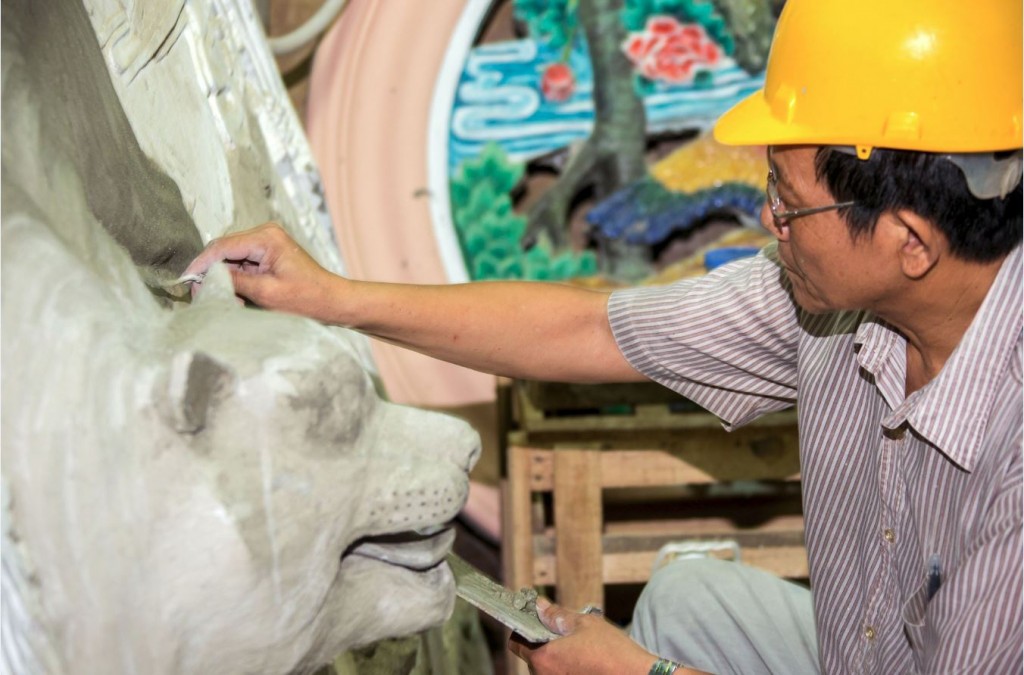 The tiger is known for its ferocity, prowess and beauty.  In Chinese folk tales, tigers kill the evil and protect the good, thus becoming a symbol for protection and to ward off evil and diseases.  Often regarded as one of the four super-intelligent creatures, the tiger, along with the dragon, phoenix, and tortoise, is often depicted in many Chinese arts.

Chaozhou is known for its stone and wood carving style.  Along with the qianci, they are also considered the Chaozhou Three Ancient Decoration Process.  All around the Yueh Hai Ching Temple are dramatic and life-like carvings of such form, with each panel telling popular folklores that expresses deep Confucian values. These Confucian-themed ornaments not only functions to pass these values to visitors and future generations, they are also created as a form of  gratitude to the deities for their blessings.  In ancient China, even till today, devotees would pay for opera troupes to perform in temples for the deities to honour them.  Other deities from neighbouring temples will also be “invited” to watch the performance.  Yueh Hai Ching Temple is one of such temples that still uphold this tradition.

Early Chinese also liked to decorate homes and buildings with creatures from Chinese mythologies, as they are believed to be magical and brings good luck and protection.  This style of woodcarving developed from the Tang Dynasty and reached its peak in the Qing Dynasty.  At the end of the Qing Dynasty, many Chinese migrate in search of a better life and brought with them this skill and style of woodcarving.  Many of the present-day woodcarvings are from that period. 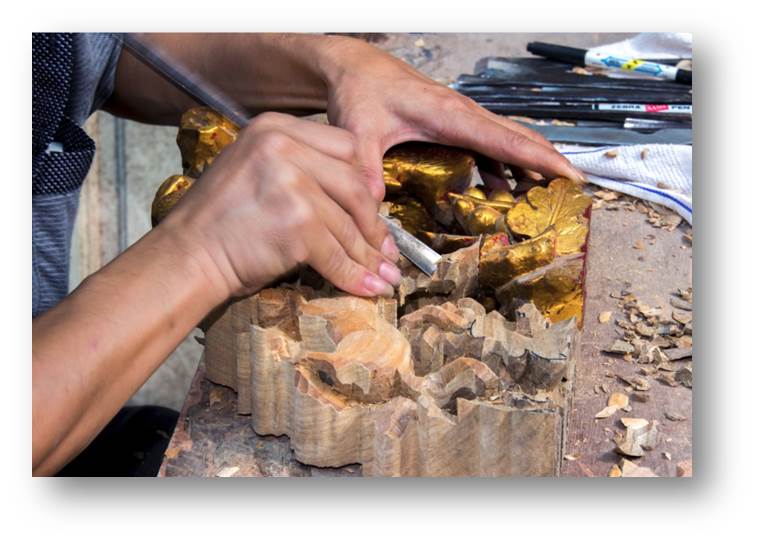 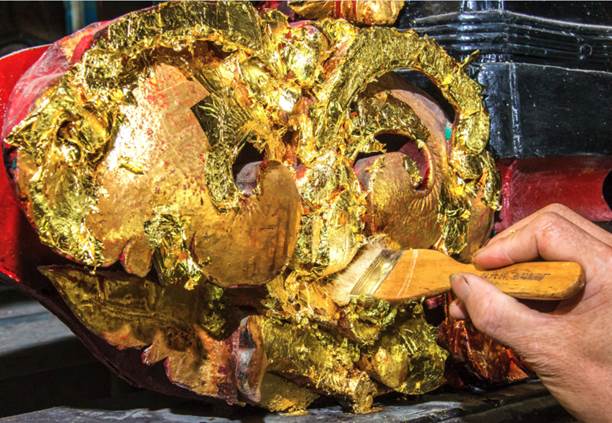 Chaozhou stone and wood carvings are closely related to the lifestyle and interests of the people.  Themes depicted are usually popular folklores, as well as floral, animals and geometric patterns.  The carvings are engraved in many different layers, with the most dramatic being the pierced-relief carvings.  This style of carving is more three-dimension, obvious with the lack of a background.   Not only is the Chaozhou-style wood carving exceptionally detailed, it is also luxuriously decorated in gold foil and paint, adding to brilliance and exquisiteness of the sculptures. 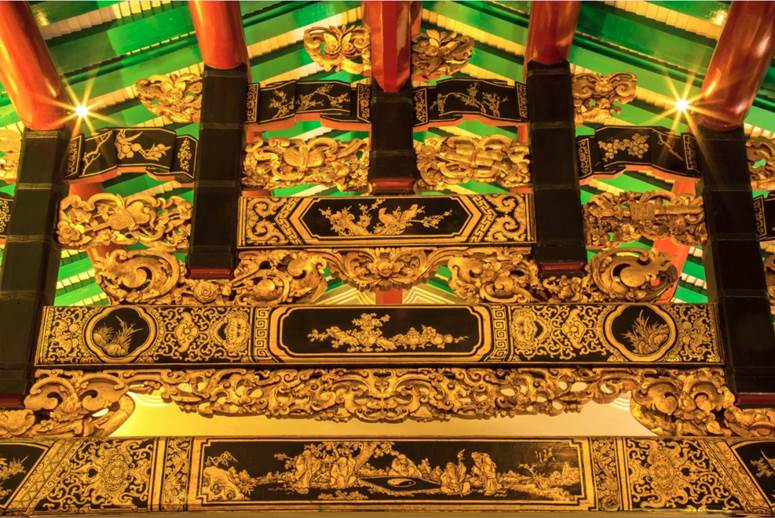 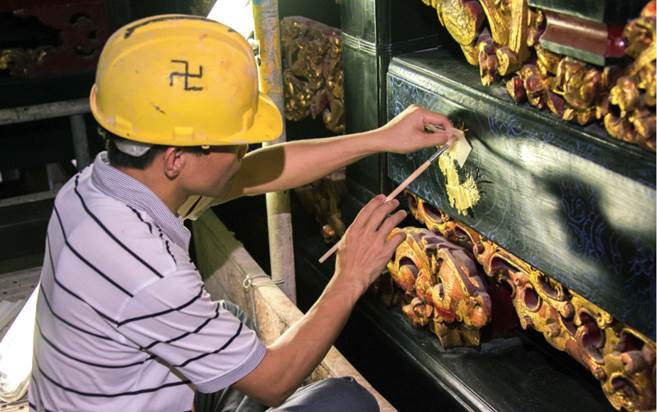 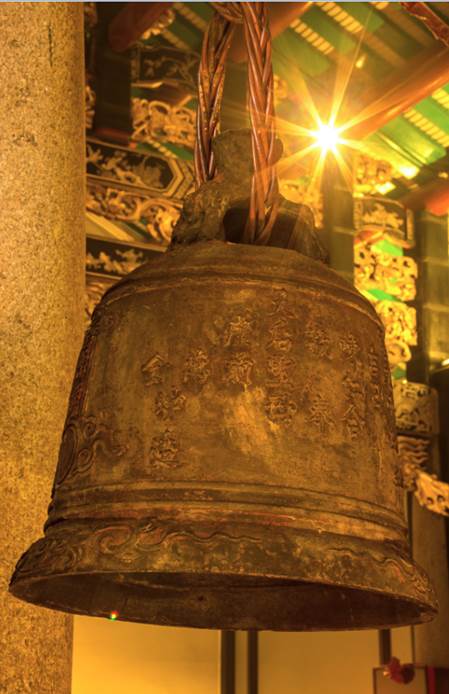 The wordings on the plaque “Shu Hai Xiang Yun” which means “Peaceful clouds over the Ocean at Dawn” was conferred to Yueh Hai Ching Temple by Emperor Guangxu of the Qing Dynasty in 1899.  It was one of the two temples in Singapore that has received such honor. This plaque was given to the temple as a token of appreciation for Singapore’s Teochew community in raising funds for  a devastating flood  in China back in 1899. The plaque is located at Tian Hou Gong. (Mazu Temple) 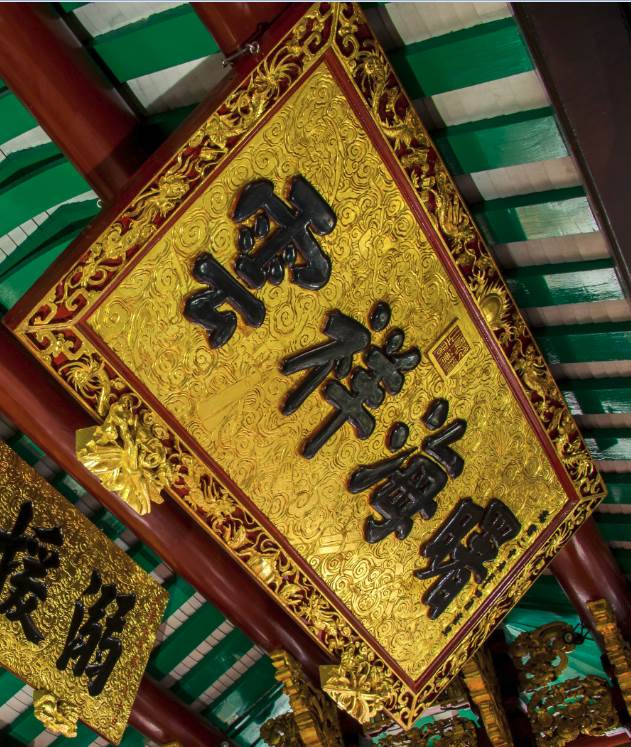