Prior to the ceremony on the same day, Dr Curtis will visit the Temple, a National Monument, at 10.15am and be guided by Architectural Conservator, Dr Yeo Kang Shua, one of the consultants, who worked on the recent major restoration.

The UNESCO awards were set up in 2000 to recognise and encourage private sector’s efforts and public-private initiatives in successfully restoring structure of heritage value in the region.

The award for the Temple recognises the meticulous conservation work carried out in 2011 to retain the building’s original patina and the ceramic ornamentations, a key feature of the Temple.

The major restoration that took more than two years to complete required the expertise of 45 craftsmen from Shantou China to work on the roof, timber sculptures, murals etc.

Managed by The Ngee Ann Kongsi since 1845, the Temple was an important stop for immigrants in the early days to pray to the Goddess of the Sea for a safe journey.  Located in the midst of prime business district in Raffles Place, the Temple is frequented by the office crowds during lunch hour and devotees during major festivals.

About The Ngee Ann Kongsi

The Ngee Ann Kongsi is a Teochew charity actively involved in educational, cultural and welfare activities in Singapore. While the initial objectives of Kongsi were to attend to the religious and welfare needs of Teochew immigrants, the charity has evolved to become a significant contributor towards the enrichment of Singapore society. Its landmark buildings, premier educational institutions and cultural initiatives have touched the lives of many generations in Singapore. 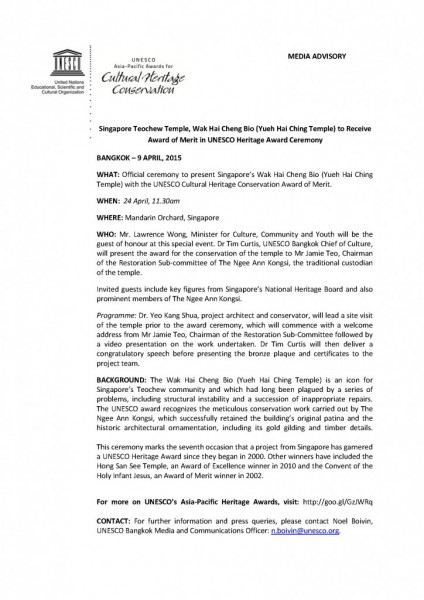