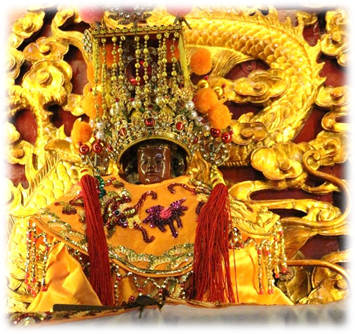 Meizhou Island in Putian, Fujian of China was the birthplace of the sea goddess Mazu. It was also regarded as the cradle of Mazu culture. According to historical records, many of the early Teochew immigrants in Chaozhou attributes their roots back to Fujian. Owing to its coastal geographical location in Guangdong province, the Teochew population are largely dependent on the sea for their livelihood. Mazu was highly regarded as the sea goddess with great spiritual powers to help and protect the seafaring population.

Following the footprints of fishermen, sea merchants and immigrants over the centuries, Mazu marks her rising influence in the Chinese community as a folklore tale to a Taoist and communal deity around the world.

In 2009, Mazu belief and customs was inscribed on the Representative List of the Intangible Cultural Heritage of Humanity by the UNESCO. 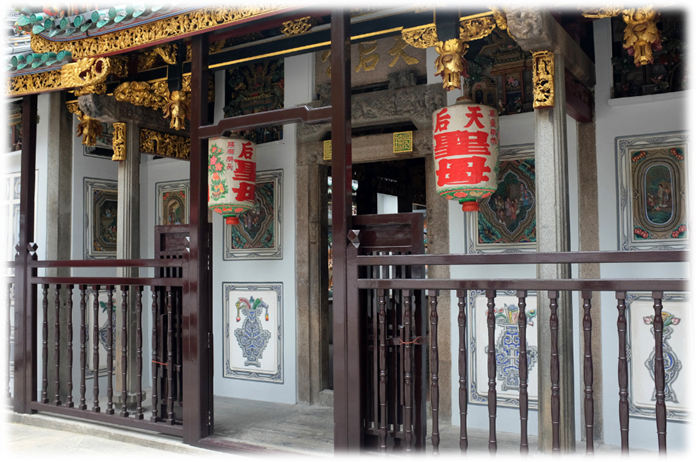 Mazu is the main deity that is worshipped at Yueh Hai Ching Temple. When the early immigrants left their hometown by sea, they prayed to Mazu to seek blessing and protection. Upon settling down in their new homeland, Mazu temples were erected in gratitude for their safe passage. Yueh Hai Ching temple celebrates the birthday of Mazu on the 23rd day of the third month of Chinese lunar calendar. Besides the ritual ceremony of fruits and flowers offering, local Teochew opera troupe are specially invited to perform at the temple as part of the celebrations.

Originally named Lin Mo Niang, Mazu was born in 960 AD on Meizhou Island of the Putian City in Fujian Province. Throughout her entire life, Mazu helped her fellow village folks by forecasting the weather, making medicines, curing patients and saving lives from shipwrecks. She devoted her life at the age of 28 when trying to save lives from a shipwreck. Local residents then built a temple for her and started to worship her as the goddess of the sea. In the Song Dynasty (1123 AD) the imperial government bestowed on her the title of Heavenly Concubine, Heavenly Queen and Holy Mother to reflect her virtues of love and sacrifices made.

Legend has it that several days before and after Mazu’s birthday, the 23rd day of the 3rd lunar month, the Dragon King and other sea creatures would come to Meizhou Island to extend birthday congratulations to Mazu. Fishermen do not go fishing on those days to share Mazu’s mercy and celebrate her birthday. Scientific research shows that during those days, many fishes came to Meizhou Island to lay eggs. The story about Mazu’s birthday party actually serves as a fishing ban which prevents fishermen from fish hunting, facilitate the reproduction of sea creatures, and promote the harmony between human beings and nature.

Back to Yueh Hai Ching Temple