In 2010, Ngee Ann Cultural Centre (NACC), a subsidiary of The Ngee Ann Kongsi, first organised the Ngee Ann National Day Calligraphy and Painting Exhibition to celebrate our nation’s independence day with fellow Singaporeans. This is also to rekindle and commemorate the spirit of the very first art exhibition held by the then Ministry of Culture in 1969. This annual event invites visual artists practising Western and Chinese art forms, regardless of race or religion, to share their masterpieces while celebrating the occasion with the joyous juxtaposition of traditional and contemporary artworks.

Each year, the event showcases the works contributed by local artists and art enthusiasts from different age groups. Members of the public will be able to view the recent works of invited artists at this exhibition, which showcases a wide range of Chinese and Western artworks such as Chinese calligraphy, Chinese ink painting, woodcarving, oil, acrylic, watercolor paintings and sketching. Drawing inspiration from our nation’s National Day celebration, a number of the participating artists would create artworks based on the Singapore theme, demonstrating their sense of patriotism. Some of the artists shared the works created using unique technique and others would venture a new style of arts.
The event is not only a platform for local artists to showcase their outstanding artworks influenced by both Western and Oriental art forms, but also a reflection of our nation’s cultural harmony and effort in preserving each ethnic group’s traditional culture and values. NACC hopes to propel and promote a more vibrant cultural scene in Singapore and the exhibition would allow the public to gain a deeper understanding and appreciation of local calligraphy and paintings.

In Chinese culture, calligraphy is an important art form that transcends generations; paintings are the expression of artists’  creativity, these artworks are heritage preserved for generations. Since 2010, Ngee Ann Cultural Centre, a subsidiary of The Ngee Ann Kongsi, has been organising the Ngee Ann National Students’ Calligraphy Competition and Ngee Ann National Day Calligraphy and Painting Exhibition each year,  to promote and preserve both Western and Chinese art forms.

The Ngee Ann National Students’ Calligraphy Competition aims to promote Chinese Calligraphy and foster a greater awareness of the traditional art form amongst the younger generation. The iconic event is open to all primary, secondary as well as college students in Singapore and attracts approximately 200 students every year. Attractive awards are given to deserving students. NACC hopes to develop students’ interest in ancient art as well as the Chinese language. Students can also benefit from practising calligraphy as a means for self-cultivation. It is the practice of NACC to display some of the winning entries alongside the works of veteran artists in “Ngee Ann National Day Calligraphy and Painting Exhibition” as a gesture of encouragement to students.

For more information about the current or past events or to view the event photos, please visit our facebook.

Please click the poster to get the event details of Ngee Ann National Students’ Calligraphy Comeptition 2023. 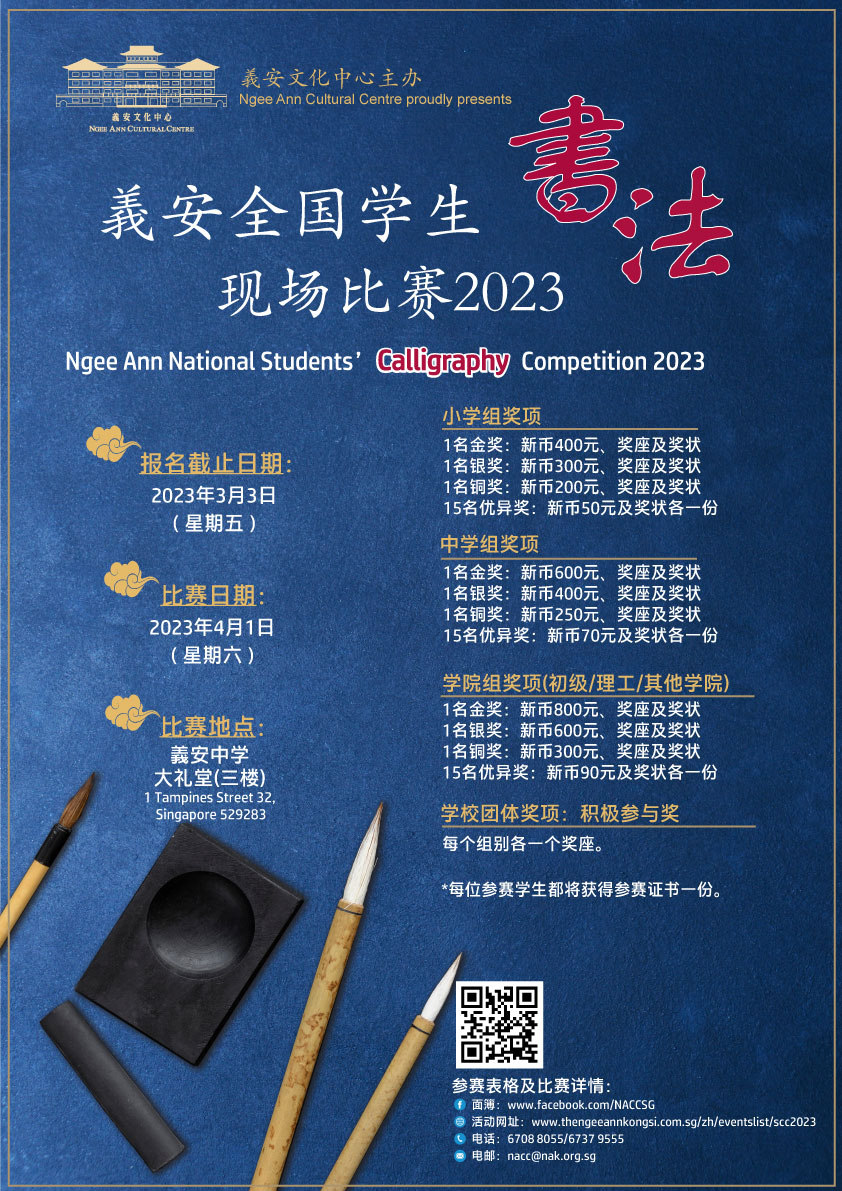